Welcome to the second year of watching old school anime for New Year’s Eve! My brother Daniel and I have turned this into an annual tradition, since we’re homebodies who prefer to stay home drinking red wine, eating fudge, and laughing hysterically at the antics of anime from the late 1980s and 1990s. Last year we watched three of the VHS tapes in our collection, and this year we picked out three more for our viewing pleasure on December 31, 2018: 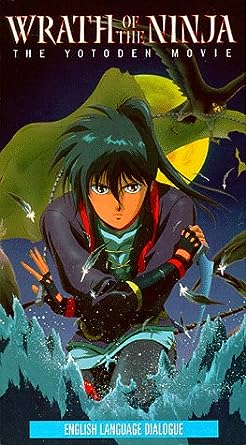 It seems like at least one of the three we pick has to be depressing. The story is that the various ninja clans are being slaughtered by the demonic forces of Nobunaga. The only survivors of two of these clans are Ayame of the Kasumi Ninja and Sakon of the Hyuga Ninja. They join forces with a third warrior, Ryoma of the Hagakure Ninja, to defeat Nobunaga with their magical Demon Weapons (a kodachi short sword, a katana, and a halberd.) This was a very uneven film and a little hard to follow due to the weird pacing, random bouts of intense violence, and numerous references to Japanese history that I was unfamiliar with. (Lots of historical locations, ninja schools, and about a billion names.) Apparently Wrath of the Ninja was originally a 3-part OVA in Japanese, but got reedited into an 87-minute feature film for the US release. This might explain why it felt like the pacing was really off. Stuff would happen or characters would get introduced and we had no idea who they were, what their significance was, etc. That made it hard to really connect with the characters and understand their motivations. Despite this, I was sad at that Ayame and Sakon didn’t end up together. (Because in typical anime fashion, everyone dies. Except Ayame. Who is left all alone again.) The tone also jumped between campy 80s drama and intense, highly detailed violence, like heads exploding, that would come out of nowhere. The drawing style and sound effects are very similar to the original Vampire Hunter D (which makes sense, as that came out in in 1985). I will give this to the old school anime: they have very original and terrifying designs for their monsters!

If Space Battleship Yamato and Starship Troopers had a baby, it might look something like this film. In terms of plot and coherence, Big Wars held together a lot better than Wrath of the Ninja. The only downside is that it took forever to get to the actual “war” part! The premise is that humanity is starting to spread into space and terraformed Mars, only to be faced with a hostile alien race known only as “the Gods” who seem to have superior firepower, as well as the ability to bring humans under their thrall to use as assassins or spies. We spend the first half of the movie following Captain Akuh who is waiting for his new state-of-the-art battleship Aoba to be finished. Akuh and his lover Darsa have lots of borderline pornographic sex, and he finally realizes that actually she’s been possessed by the Gods and is trying to recruit him. He ends up killing her, and the battleship Aoba, along with the crew are the only ones to escape from a sneak attack on the city by the Gods. They then hatch a daring plan to destroy the alien stealth ship called “Hell” which has been decimating humanity’s forces on Mars. (Despite it’s power, it looks like a giant seashell, which kind of undercuts the image.) For once, almost everyone lives! Well, lots of crew get killed in the assault on Hell, but the main characters survive. I was really interested in the world and finding out more about these “Gods,” like why they are attacking humanity and why the only gods we see look like beautiful blond women with strange eyes. They also say in the beginning that Akuh was at a medical facility for some kind of rehabilitation, which makes me wonder why. It feels like there could be more to the story and world, but provides a pretty satisfying stand-alone film. 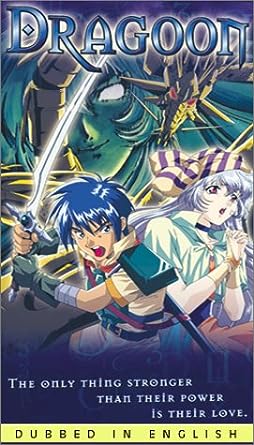 This was our favorite out of the anime we watched for New Year’s, as it seemed like a mixture of Slayers (the characterization) and Howl’s Moving Castle (setting design). It’s campy and corny and a surprising amount of female nudity, but we loved the characters and were really invested in the story. A young warrior named Sedon finds a mysterious girl called May naked and alone in the forest with no memory of who is is or how she got there… or why soldiers of the Empire are looking for her. (It was nice to see Sedon have a fully functioning family; you don’t see that in a lot of anime.) He decides to protect her as she searches for her past, and during the story it’s revealed that May possesses some kind of power known related to something called “the Dragoon” which the Empire wants to harness for their own evil purposes. Sedon and May are joined by Prince Lane (who totally seems like a more intelligent cousin of Gourry Gabriev), Sedon’s little sister Millie (who reminded us of a young Lina Inverse with her sass and appetite), the fire sorceress Lillith (who looks like what Lina Inverse wants to be and has an axe to grind with the Empire), and Lillith’s young ninja-like friend Bub. Together, they set off to uncover May’s past, fulfill their destinies… and totally leave us hanging at the end. Because guess what? THIS IS ALL THERE IS! THEY ONLY MADE THREE EPISODES! Apparently Dragoon is either based on or a spin-off of a Japanese game called Ryuuki Denshou: Dragoon, but it was never released in English. No manga follow-up, no indication if they are or ever planned to continue, despite it really being presented like the first three episodes of a much longer anime! WHICH TOTALLY SUCKS BECAUSE THIS WAS FUN AND CUTE AND I WANTED TO SEE MORE! ARGH!

Aside from my ocean of disappointed tears regarding the fate of Dragoon, this was another fun night spent sampling old school anime. Look for another installment at the end of 2019!