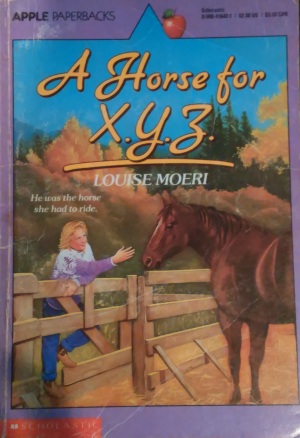 The last of the horse books! (For a while, at least.) A Horse for X.Y.Z. is from the set of four that my Uncle Bruce gave me, three of which left enough of an impression for me to include in subsequent entries of the Obscure Books From Childhood blog series. And whenever I read this book, I want to eat canned peaches.

It’s the end of summer camp and Solveig Nelson, a girl smack-dab in the middle of the alphabet, wants nothing more than to ride Snake Dancer. No one has been allowed to ride him, but that’s not going to stop Solveig. She slips off the bus just before it leaves, figuring she can get a quick ride in before they realize she’s missing and come back for her. But things go horribly wrong. Solveig overestimates her ability to control Snake Dancer and he takes her on a wild ride into the forest. The bus doesn’t come back and to make matter worse, now there are men with a gun at the camp looking for Snake Dancer. Solveig has to use her wits to keep herself and her horse safe until help arrives… if it ever does.

A Horse for X.Y.Z is both a fun and interesting mystery and adventure story, but also a bit of a cautionary tale. Because Solveig doesn’t want to be ordinary, but rather the adventurous persona she’s created called “Xenia Yseult Zilch,” she takes a risk and ends up with far more than she bargained for. A wild ride into the woods at night to dodging bullets and scavenging for food and other supplies from the deserted camp is not what Solveig had in mind when she sneaked off the bus. But she shows a great deal of common sense, bravery, determination, and resourcefulness when things go pear-shaped. I actually learned a lot of basic survival ideas from this book, and developed an obsession with canned peaches, which one of the main foods Solveig managed to get her hands on. It’s interesting, suspenseful, and has enough danger to be exhilarating without being too scary for a younger reader.

It just goes to show that even a very ordinary person can rise to the challenge in extraordinary circumstances.