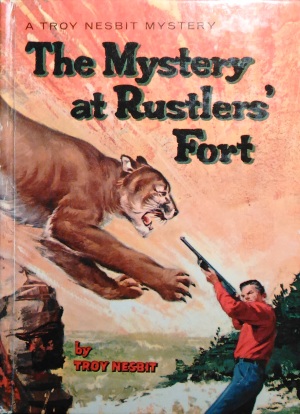 A heavily loaded station wagon, with a small, two-wheeled baggage trailer hitched behind, stood in front of Park headquarters on the North Rim of the Grand Canyon.

“Let me look,” Phil McKenny said, bending over the big map his cousin Buzz Fletcher had spread out on the front fender. “Where’s our camp going to be?”

A lot of people list Hardy Boys or Nancy Drew as their introduction to mysteries. For me, it was my uncle’s Troy Nesbit Mysteries. Granted, I only ever read two of them, The Diamond Cave Mystery and The Mystery at Rustler’s Fort, but the latter in particular stuck with me and I’m pretty sure was one of the books that kicked off my interest in mystery novels. In time, my obsession with pure mysteries faded, but I never lost my initial appreciation for red herrings and the incessant search for clues within a story. Not to mention loving duos who work together to solve that mystery.

The Mystery at Rustler’s Fort is the story of Phil and Buzz, cousins who have come out with Buzz’s parents and little sister on a camping trip to the Grand Canyon. It’s more of a working vacation, as Buzz’s parents, “the Chief” and Amy, are both scientists there to study wildlife. Amy’s there to study birds while the Chief is focusing on mountain lions. Phil has never been out to wilderness before, and is eager to help and explore alongside Buzz. But mysterious things start happening around the camp. The person who originally was at the campsite is very hostile about leaving, but then returns acting very friendly. Another strange-looking man keeps hanging around the camp, apparently spying on them. Buzz’s sister Kitsy hears footsteps and rustling in the camp at night. And the Chief is unable to get anything done with all of these interruptions. Phil and Buzz are determined to get to the heart of the disturbances… but end up with more than they bargained for.

I remember learning a lot of things from The Mystery at Rustler’s Fort. The story itself is fictional, but it contains a lot of facts. I learned about Geiger counters and how they are used to find uranium deposits. I learned that when you camp, you should dig a small ditch around your tent to keep the water from flowing in. I learned that birds and bats are tagged and tracked by scientists. I learned about pressure-sensitive camera traps used to take pictures of wild animals. I learned that you shouldn’t hike in wet socks unless you want to get blisters. I learned that deer aren’t always harmless but pack a nasty kick. I learned that mountain lions have many different names, including puma and cougar, which all refer to the same animal. It’s amazing the kinds of tidbits you pick up from stories like this one that stick with you for years.

As an older reader, the characters are almost painfully good-‘ol-American boys. You like them, but mostly because they don’t give you a reason to dislike them. They’re just fifteen-year-old boys enjoying the outdoors and sometimes letting their imaginations run away with them. They make some poor choices (like buying a Geiger counter even after the Chief tells them not to and then hiding it) but also some ingenious ones (like rigging a camera trap to catch the nighttime prowler). Sometimes it’s frustrating how the adults keep trying to explain away the disturbances, but from their perspective it is more rational. The clues are skillfully placed and the story packs a lot into 280 pages, yet is paced so well that you find yourself flying along. And it had been long enough since I’d read the story that I honestly didn’t know who the perp was and had a fun time trying to put the pieces together alongside Buzz and Phil. So if there are any fans of the Hardy Boys and similar tales out there who missed The Troy Nesbit Mysteries, you may want to check them out if you can.