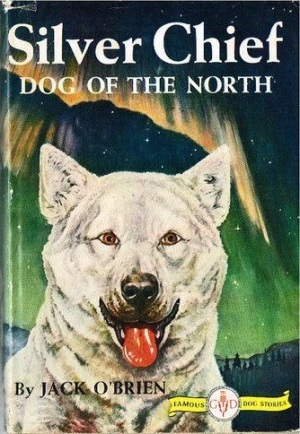 Across the brooding desolation of the frozen Northland drifted the eerie mournful howl of wolves. It died away, and a heavy silence closed in upon the stark land.

Again the call. This time from the south, in answer to the first. Again the silence.

The quiet has scarcely settled when a sharp, crackling sound is heard coming from the edge of a sparse growth of near-by timber. The head of a giant moose jerks suddenly upward. The wolf call means danger.

Ever since I read the book Black Beauty as a very young child, I’ve loved stories told from the perspective of animals. Not the anthropomorphic animals that populate many children’s books and TV shows, but from animals who actually are animals trying to live in a world dominated by humans. And the Disney film Balto cemented my love of wolves, wolf-dogs, and stories set in the icy climes of Alaska and Canada.

Silver Chief: Dog of the North is the first book in a trilogy that focuses on the wolf-dog Silver Chief and his relationship with the Canadian Mounty Jim Thorne who catches and tames him. The story actually begins with Silver Chief’s mother, a runaway Indian sled dog named Dee who encounters and ends up mating with a wild wolf, which results in Silver Chief’s birth. Eventually, he grows into a fantastic canine adult with the savage beauty of his wolf father and the deep loyalty of his dog mother. This loyalty ends up being given to Jim Thorne, a member of the Royal Canadian Mounted Police who is on the trail of a criminal named Lavel. Silver Chief proves to be the most loyal friend a man could have when the hunt for Lavel goes badly and both the hunter and the hunted are forced to work together to survive a terrible blizzard.

The story is not told from the human-like first person perspective that Black Beauty has, but a slightly more distant third person which interprets what Silver Chief is thinking. Dialog only comes from the human characters. But it remains an extremely powerful and highly descriptive story. The north is described in terms both beautiful and terrible that absolutely fascinated me. Rereading the book, I still loved it, although the language can be a little colonial at times due to the time it was written that makes adult me cringe a bit. And while I know that dogs do love their good owners unconditionally, some of the ways that describes that bond were a little strange or creepy (like Silver Chief being described as a “love slave” to “his master.”)

Still, that doesn’t detract from the enjoyment and overall beauty of the book’s language. There’s comedy and drama and horror all rolled together (along with some sometimes graphic descriptions of injuries, so be warned.) If you like stories about dogs or survival adventures stories in the snow, then Silver Chief: Dog of the North may be for you. (And if you really like it, there are at least two more books in the series, Silver Chief to the Rescue and The Return of Silver Chief.)