Welcome back to our third year of watching old school anime for New Year’s Eve! My brother Daniel and I are the opposite of party animals and prefer to spend the holiday evening sampling Apothic Dark wine, eating cheesecake, and laughing hysterically (and sometimes marveling) at the antics of anime from the 1990s. Last year we watched three of the VHS tapes in our collection, but this year we picked out four since one came in two parts. So, this is what we watched on December 31, 2019:

I’d watched Record of the Lodoss War: Chronicles of the Heroic Knight ages ago, so I knew who Ashram and Pirotess were. Fortunately, one did not really need any background on the characters in order to (more or less) watch the movie. Unfortunately, because I did know a little about the characters, I was even more disappointed. At least in this version. It’s a complete and utter mess. Pirotess is shuffled off to side character status so we can focus on the very annoying Prince Redon, and I was very disappointed with how they “saved” Ashram. (Spoiler: they don’t. Well, they save his soul, but he still dies and leaves Pirotess alone.) The plot lurches along with little rhyme or reason and doesn’t explore some of the intriguing elements of world-building. There are also way too many characters with very funky, difficult-to-remember names (and this was the first time we watched for the night, so we were still sober.) Some of the animation was nice, but overall, there was little to recommend it other than a desire to see the continuation/conclusion of the Lodoss War saga, regardless of quality. Maybe the OVA version, The Chaos Ring, is better, but I think you can safely skip The Motion Picture.

Neither Daniel nor I were expecting to like this anime. When the back of the box describes the anime as having “stylish eroticism, graphic horror, and pulse-pounding action” we both rolled our eyes and went, “Great. Time for some blood and hentai I guess.” And… well, sort of. There are definitely sections of the film that are basically soft-core animated porn, but the gore is actually not too bad. If you can get past those, Wicked City is actually a pretty good movie. Think film noir, but in Tokyo with monsters. The main character, Taki, is a Black Guard, one of the people who protects and enforces the boundaries and peace treaty between the human world and a parallel/alternate/magical realm called “The Black World” ruled by shape-shifting monsters. But when he has to team up with a Black Guard named Makie who is one of those monsters, to protect and irascible old mystic until the peace treaty can be renewed, things get interesting… The plot is pretty well-constructed, the world-building intriguing, and the characters are interesting and likable, or at least fun to watch. I really enjoyed the banter between Taki and Makie, and Taki’s voice-over narrative in key spots really helped smooth the story and keep you oriented. I was disappointed by how Makie is initially presented as a bad-ass but quickly becomes the damsel in distress, but I was also not surprised by it, considering the time period and subject matter. So yeah, go figure that the anime we thought we would like (Crystania) was a disappointment and the one we thought we wouldn’t like (Wicked City) proved to be a more intriguing and enjoyable movie. 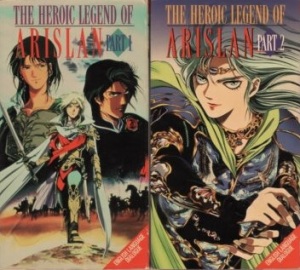 We were blown away by this anime. Part 1 hits the ground running, both visually and narratively, and does not stop. The animation is simply beautiful and reminded both of us of Lord of the Rings. It’s stylized, but beautiful and atmospheric and has some amazing shots and angles that you just don’t see in a lot of anime. (It also helped that all of the main men are gorgeous bishonen that we got to drool over.) The titular character, Prince Arislan, has a good heart, but is a bit young and naive. He’s forced into exile when he is betrayed in battle and his loyal forces wiped out. Accompanied only by his loyal knight Daryoon, they must seek allies in unlikely places, from the wine-loving former adviser Narsus and his servant Elam, to the mystic warrior-priestess Pharangese, to the trickster minstrel Gieve. Yes, it does sound like a D&D party, and no I do not care one bit because they are so much fun to watch (because they are pretty) and listen to (because they are witty.) Sadly, Part 2 does not quite live up to the promise of Part 1 with the animation not quite as breath-taking, the dub was done by a different company so there are inconsistencies, and the story getting bogged down in fantasy politics that do not quite make sense. It also doesn’t help that this OVA series only stands at 6 parts and, as far as I know, remains unfinished. There are two modern anime and manga series, plus video games, all to adapt a 16-book novel series and holy moly that’s insane (yet par for the course with anime.)

So there you are, the third installment of Old School Anime! If you’re curious about what we’ve watched in previous years, you can find the 2018 Edition and 2017 Edition here on Second Unit Reviews. We’re actually almost out of the classic VHS, so I’ll need to get some more for next year! If you have any recommendations, please let us know!